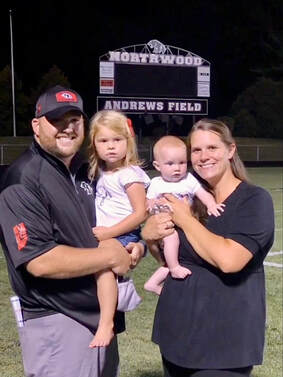 Offensive Line
Coach Estepp returned to his Alma Mater for the 2020 season to coach the outside linebackers at NorthWood. Prior to joining the Panthers, Chase was a Varsity Assistant and JV Head Coach at Kankakee Valley High School. He spent 5 seasons coaching the offensive line for the Kougars.


Chase is a 2007 NorthWood High School graduate and earned 9 varsity letters during his career as a Panther. He was a 3 year starter on the baseball and football teams. As a member of the Black Crunch football team under Coach Rich Dodson, he started on the offensive line for the 2005 3A State Championship team and brought home the school’s first football state title. Chase was then able to represent NorthWood High School in the 2007 North-South All Star game. As the starting catcher of the baseball team, he was able to help win the 2007 3A Sectional Championship.


Chase graduated from Manchester University in 2011 where he earned a Bachelor’s Degree in Elementary Education. He was a four year letterman on the Spartan football team. He started all 40 games of his career on the offensive line, was voted a team captain for the 2010 season, and was all conference for 3 years.


Coach Estepp currently teaches 2nd grade at Woodview Elementary and lives in Nappanee with his wife Mary and their daughter Macauley (4) and son Graham (1).


Favorite Food: BBQ
Hobbies: Golfing and Grilling
Reason for Coaching: I want to give back to the NorthWood community that helped raise me and gave me so many opportunities to succeed in the classroom and on the field.
Proudly powered by Weebly